Sophus3 Reveals the Winners of the Automotive World Cup

France runner’s-up as Citroen perform above expectations; Italy and Romania surprise semi-finalists with their national car brands the best of the rest

Sophus3’s first bi-annual automotive consumer analysis media briefing kicks-off at 9:30am on Tuesday 10th July in London. With 90 minutes on the clock.

London, Friday July 6th 2018: According to the latest data from automotive industry analysts Sophus3, FIFA World Cup partners Hyundai and Kia have scored a memorable victory in the tournament. With a record 24.4 million television audience in the UK for England’s dramatic FIFA World Cup penalty-shoot-out victory against Colombia on Tuesday 3rd July, all eyes in automotive marketing are on the results off the pitch and on the car brand websites. And traffic to Hyundai and Kia’s websites in the build up to The Three Lions’ crucial game increased significantly.

Between 6pm and the England v Colombia kick-off at 7pm – the crucial hour typically reserved for securing the best seat in the house or making the final dash for home or pub – both South Korean car brands saw significant traffic increase to their websites in the UK.

Sophus3 has been analysing online car-buyer traffic to automotive websites since the time of the 2002 World Cup in Korea and Japan and in the past 16 years has pulled together an enviable automotive squad at the top of the Premiership in the world of digital analysis: every volume and premium car brand in Europe is supported by Sophus3, giving the London-based team a unique view of automotive consumer behaviour and trends.

Scott Gairns, Sophus3’s Head Coach said: “We would expect to see a strong performance from the South Koreans during the world cup given their status as an official partner, but their results indicate a real win for the brands: you could say their fans gave 110 per cent! Their marketing and digital engagement showed a significant increase at a time when we would expect people to be thinking more about England’s chances if the game went to penalties than considering their next car.”

The only other car brand to see a positive move up the field and an increase in online traffic before kick-off was Citroen, matching the French football team’s improved performance as the tournament in Russia has progressed.

All other car brands in Europe showed an unsurprising decline in web traffic between 6pm and 7pm last Tuesday, as most pundits would have predicted, but Fiat and Dacia proved to be the best of the rest and played off for the honour of coming third.

“The French will be really pleased with their result and we will look in more detail at car brands’ world cup performances at our first bi-annual automotive analysis media briefing on Tuesday 10th July,” Gairns continued. “Whether England fans will be watching their team the following day in the semi or test-driving a Volvo will depend on their match tonight against Sweden. After the Jules Rimet trophy has been lifted by the winning team later this month we will be analysing all of our car brand clients’ online performances this summer. And as the 2018/19 football season kicks off in August, all hopes will be for a strong set of results in September to provide a successful end to the car sales season.”

On July 10th, Sophus3 will host the first of its planned bi-annual media forums offering key insights into the digital winners and losers amongst car brands over the previous six months, and look ahead to the next six months, forecasting 2018’s new car sales results based on the ongoing real-time analysis of over one billion clicks on car brands’ websites per year. https://www.sophus3.com/events/sophus3-media-forum/

The company was founded in 2002 with the ambition to build a collaborative online analysis platform for car brands in order to help brands understand consumer demand and market better to consumers increasingly researching cars online.

As Europe’s only automotive technology company analysing online activity on behalf of all European-based global car brands’ websites, Sophus3 provides quarterly (AMI) market reports providing a comprehensive picture of consumer online behaviour on and between car brand digital platforms, whitepapers such as the recent – “The end of the ICE age? – Digital insights into the electric vehicle buyer” – and an annual automotive insights forum and report – “The digital car buyer in numbers”. 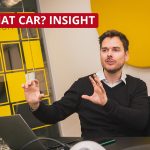